Cyberpunk 2077 Isn’t The First Game To Launch In A Broken State, But It’s The Worst Offender Yet 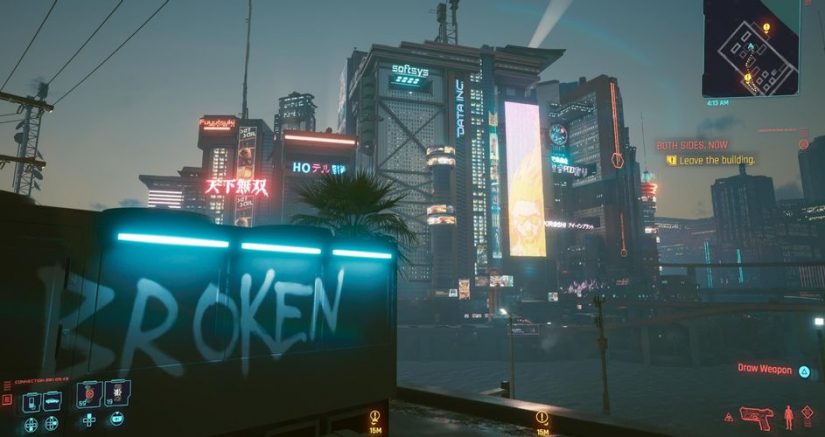 Over the years, we’ve seen loads of games launch in less-than-polished states. In most cases, this usually comes hand-in-hand with what people perceive as unfulfilled promises. I’m reminded of Fable 3 here, which didn’t come out with hundreds of bugs, but certainly didn’t include half of the things Peter Molyneux said, “Yep, that’s in the game” about.

I think it’s worth noting that a broken game can be fixed – obviously. Final Fantasy 14 was taken down for almost a full year after it flopped. I met Naoki Yoshida last November and he told me that the devs spent countless hours playing World of Warcraft and other MMOs during the game’s downtime in order to understand what they did wrong. When A Realm Reborn eventually came out, people forgot all about the original botch. Final Fantasy 14 was good now. That’s all that mattered.

The same can be said for Hello Games and No Man’s Sky. In this instance, the game that people bought and played at launch certainly wasn’t the game that had been marketed towards them. People were justifiably annoyed about this – if I’m giving someone my hard-earned money for something I’ve been told is certified organic, I’m going to be well pissed off if you serve me up gone-off frozen cardboard. The same principle applies here – it genuinely is an exemplary case of false advertising.

Fallout 76 was just a big broken mess that made no sense. I don’t feel bad saying that because thankfully it’s good now. But Jesus. Fallout 76 was a pile of shite slathered in cheap perfume. Anthem… Well, Anthem could be on the up-and-up with its next update. Let’s reserve judgement on whether or not it can still be good down the line for now. I hope it can be. But the Anthem we got at launch: piss poor.

So now we have Cyberpunk 2077, a game that people thought would change games forever. Before I move on, I’d like to say that a lot of people had ridiculously unrealistic expectations of what Cyberpunk 2077 was going to be. There’s a lot of magic in games, but like magic in real life, it’s mostly smoke and mirrors, cutesy sleights of hand in order to fabricate a lovely little illusion. But I don’t think people know what making a game is actually like. If you have a quick browse of the Cyberpunk 2077 subreddit, you’ll see what I mean. People are posting lists of about 50 features that aren’t in the game and demanding retribution. Mate, it probably took some poor lad two weeks to get horse balls to shrink in the cold in Red Dead Redemption 2. Have you any idea what goes into implementing a fully-functional subway system that operates based on scheduled departure times? You can’t just say, “put that in.” Come on.

That being said, Cyberpunk 2077’s launch is inexcusable, and I think it’s actually far worse than most of the other “broken” games we’ve seen before – something that is largely proved by Sony and CD Projekt’s decision to remove it from the PS Store. You see, Cyberpunk 2077 was intentionally mismarketed. Critics were not given access to PS4 or Xbox One codes – or PS5 and Xbox Series X, given that they’re currently running the same versions of the game as last-gen consoles. We played Cyberpunk 2077 on PC with strong GPUs and were told that a day one patch would fix the majority of minor bugs we experienced. I watched Jackie walk into a locker and accidentally cause it to blow up. I died because my parked car exploded. I saw lots of bugs, but they were small, and I think myself and the rest of the team at TheGamer – and at the vast majority of other sites – covered this game as honestly as we could have. It’s a great game that felt as if it could use a big, hefty patch.

But then we saw the other versions of Cyberpunk 2077, and it all became alarmingly clear: this was a broken game that was pushed out the door by the top brass at CD Projekt Red, regardless of the fact that it didn’t meet the majority of prerequisites it had established for itself.

I think it’s worth mentioning that Cyberpunk 2077 is going to be good. The Witcher 3 was buggy at launch, and gradually transformed into what is widely believed to be one of the best RPGs of all time over the course of a year. CD Projekt has stated that there will be a patch next week, followed by more substantial updates in January and February, at which point Cyberpunk 2077 should be in proper working order. I believe that the studio is being sincere and truthful – the issue is that it wasn’t sincere and truthful before now.

For what it’s worth, this doesn’t give you license to be a pure wet-the-bed. Your disappointment is completely justified and you should be annoyed at CD Projekt. That does not mean you can harass devs who likely had absolutely no input on when the game was released. Think about it: if you worked on something for almost a decade, would you like to show it to the world in an unfinished state? Obviously not. But quest designers, concept artists, and programmers don’t make these decisions. In fact, they’re the ones who have to fix this whole fiasco, despite having had absolutely no part in it. You’re harassing people who are just as upset as you, who are unanimously working as hard as they can to make you feel better. Don’t be a dick.

The fact remains that Cyberpunk 2077 is more than an ordinary botch, even in an industry where botches are commonplace enough for me to start this article with a list of five blockbuster bungles. It was genuinely deceptive to allow people to buy this game. Christmas is next week and people spent 70 quid they could have used to get their family something nice on a game they can’t play for over two months. At least the other games were more transparent about their issues, if only for the fact they didn’t actively conceal them until after the transaction was made. I’m glad to see that they all managed to make a turn for the better – well, Anthem is still wrapping around the bend and could still smack into a curb and frontflip into a wall. But the fact I know that Cyberpunk 2077 is going to follow suit and end up being good makes this situation actively worse. I feel so sorry for the devs, but have no sympathy for CD Projekt’s suits, who willingly turned a profit on day one for a game that won’t be properly playable until day 70.

Broken games can be fixed, but broken trust is much harder to restore. I think Cyberpunk 2077 is going to be as impressive as it was intended to be a couple of months down the line – but its problems go far beyond a few bugs.