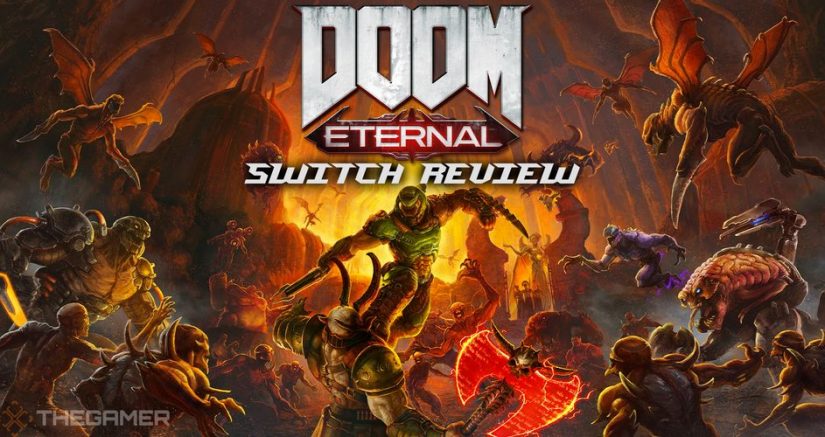 My nephew is a big fan of the fact that I work in the gaming industry, which means he is also always taken aback when I don’t play a game that he’s all-in on. Doom Eternal is one of those games. In fact, Doom Eternal might just be his favorite game of all time. This shouldn’t come as a surprise since this is a kid who has double-digit complete playthroughs of Doom (2016) under his belt.

That moment finally arrived this past week, when I had the chance to play through the recently released Nintendo Switch version of the game. I can’t say that Nintendo Switch is the ideal platform to play Doom Eternal on, but it did whet my appetite enough to want to finally pull the trigger on picking it up once it releases for PS5.

Rather than speaking to everything that Doom Eternal has to offer – my colleague Eric Switzer has already done a superb job of that – I’ll mainly be talking about my experience of playing the game on Nintendo Switch, specifically in handheld mode. Obviously, being able to rip and tear while on-the-go is the most appealing factor with the Switch port, which is fine if that’s the only real reason why you’re picking it up. Otherwise, there’s just not really many reasons to recommend picking it up on Switch instead of another more powerful platform.

First and foremost, it’s no secret that Doom Eternal is a massively grandiose FPS featuring over-the-top kill animations and other epic scenes. It’s also no secret that Switch ports generally come with toned down graphics compared to PC, Xbox, and PlayStation simply due to the technical limitations of Nintendo’s mobile console. If you’re willing to make that sacrifice, then great. You’ll likely enjoy it. But if your goal is to take in the full visual experience, why not pick up Doom Eternal on a more powerful platform?

To that end, reading anything on the Switch’s screen is incredibly difficult due to the tiny text. This issue is, of course, alleviated when playing in docked mode, but the amount of eye strain that comes when trying to read the in-game menus or text is a big turn-off.

Doom Eternal’s controls feel as intuitive as any other first-person shooter. They do, however, feel looser than what I would expect to feel on, say, a DualShock 4 controller. I don’t think the game itself is at fault for this. I always find the responsiveness of the Joy-Con controllers to feel a bit wonky. Which is a shame, given the tight control scheme required for a game like this.

Besides the tutorial, I haven’t been able to play an online multiplayer match yet, which pits a Doom Slayer against two player-controlled demons. My guess would be that this is due to a tiny player base – I’ve connected to pre-game lobbies only to have myself or another player time-out, which kicks us out of the session. I’m hopeful that I’ll be able to jump into the multiplayer fray sooner rather than later.

I know I have only touched on the lesser elements of the Doom Eternal experience on Switch. However, Panic Button deserves major props for dialing down such an intense and graphically demanding game to be able to be played on the portable console. So much is packed into the small device, and despite the issues noted above, it still somehow manages to work. The platforming mechanics are fun. The up-close-and-personal kills are satisfying to behold. If you’re able to immerse yourself in the tiny touch screen, you’ll feel like a part of the massively chaotic world that’s deteriorating around you. Despite the technical limitations of the Nintendo Switch, Panic Button has put out yet another successful Switch port.

Recommending Doom Eternal on Nintendo Switch ultimately boils down to two factors: the Switch is the only gaming system you own, and/or you plan on playing the game near-exclusively while on-the-go. Honestly, for a Nintendo Switch title, Doom Eternal is solid. It just feels like a game that benefits from being played on a more powerful platform.

A Switch copy of Doom Eternal was provided to TheGamer for this review. Doom Eternal is available now for PlayStation 4, Nintendo Switch, Xbox One, PlayStation 5, Xbox Series X and Series S, PC, and Google Stadia.